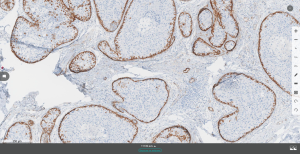 A, Uterus, myomectomy: Leiomyoma with infarctive-type necrosis and degenerative changes.

All submitted slides were reviewed in conjunction with recut slides (x3) prepared from blocks B4 B9, B10 B11. Selected slides were additionally reviewed in staff conference. Viewers concurred that while there is mild nuclear pleomorphism in some foci of the uterine mass, which also appears densely cellular in aleas there is no significant atypia or mitotic activity(<1 per 10 high power fields). Patchy necrosis is presert but has a more zonal, infarctive-type pattern rather than coagulative tumor cell necrosis. The features are those of a focally cellular leiomyoma with infarctive necrosis.

Viewers concurred that the doinant cystic lesion on the left side derives from ovary and shows sufficient papillary tufting, atypia, and nuclear stratification to warrant designation as a serous LMP tumor or atypically proliferating serous tumor. Foci of potential microinvasion were investigated in several blocks but deeper levels failed to show evidence of microinvasion. Block 11 shows a focus of transitional type metaplasia (“Walthard rest”) in an apparent edematous, fimbriated end of fallopian tube, near a focus of nvoluting endometriosis. Sections of fallopian tube show typical features of clinical hydropsalpinx.