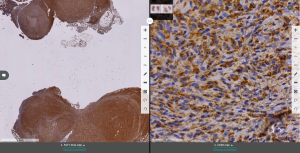 The epithelioid cell is characterized by round to oval or indented nuclei with vesicular chromatin and variable prominent nuclei. The cytoplasm is lightly eosinophilic often with foamy or vacuolated appearance with indistinct cell borders.

There are sprinkled lymphocytes on the background, often with emperipolesis-like appearance, which on low power resembles sinus histiocytosis with massive lymphadenopathy (Rosai-Dorfman disease – RDD). Mitotic figures are not easily seen and the proliferation index in less than 10%, few apoptotic bodies are seen without tumour necrosis. The neoplastic cells expressed CD 68, FXIIIa and strong nucleocytoplasmic positivity for S100. They are consistently negative for CD1a, CD21, CD23, CD34, EMA, and SMA.

The spindle to ovoid cell is characterized by storiform or whorled bundles with eosinophilic to amphophilic cytoplasm and indistinct cell borders. The nuclei are ovoid to elongated with bland nuclei and inconspicuous nucleoli. Few sprinkled lymphocytes are seen in the background and focal area of necrosis is seen with lympho-histiocyte like elements surrounding it. Mitotic figures are not easily seen and the proliferation index in less than 10%. The neoplastic cells expressed CD68, FXIIIa and are consistently negative for S100, CD1a, CD21, CD23, CD34, EMA, and SMA.

The differential diagnosis of this tumour is between the family of histiocytic&dendritic cell neoplasm and sinus histiocytosis with massive lymphadenopathy.

A hallmark of RDD is emperipolesis, wherein lymphocytes are contained within the characteristic histiocytes and the cells are positive for S100, CD 68 and CD163.

Though the epithelioid component of this tumor has almost all the characteristic of RDD, the absence of clear-cut emperipolesis excludes the diagnosis of RDD. On the basis of morphology and immunophenotype, this subcutaneous tumor could be considered  to the family of histiocytic&dendritic cell neoplasm with focal features of interdigitating dendritic cell sarcoma.